To keep up to date with the news of the campsite

Year Francesc Català-Roca (Valls, 1922-Barcelona, ​​1998), with exhibitions by the photographer in Valls and Reus

100 years ago he was born in Valls (Tarragona)  Francesc Catala-Roca, 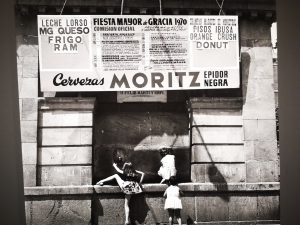 one of the most important Spanish photographers of the XNUMXth century, especially between the post-war period and the 70s, which ranged from portraits to industrial images, including landscape and monument photography, with a valuable legacy in architecture photography.

Francesc Català-Roca's photography constitutes the cornerstone of documentary photography in Spain. His speech in black and white combined the beauty of everyday life with reality, sometimes harsh and bitter.

The speech of Francesc Catalan-Roca it is full of “authenticity and awareness”. The photographic report is free of any experimentation and artistic attempt. He himself considered himself a professional photographer whose function was to document what was presented before his eyes, rejecting the idea of ​​an artist. «His mission –according to Conesa– was to rescue, immobilize moments that the photograph itself will make relevant. Without intervening. Without adding more construction than the choice of instant and optics. However, although unintentionally, in addition to the documentary value, the great artistic value of Francesc Catalá-Roca's photographic legacy cannot be denied. His photographs are "icons of memory" and without a doubt a master photographer who is worth discovering, disseminating and recognizing his extensive work.

Francesc Català-Roca was born on March 19, 1922 in Valls, son of the legendary Pere Catala i Pic, also industrial photographer and specialized in publicity. At the age of 13 he began to work with his father, who did not want to remain on the sidelines of the new graphic languages, became interested and participated in the speeches of the pre-war avant-gardes. He knew and was interested in the work of Man Ray and he was the author of some propaganda posters for the republican cause. As an apprentice, Francesc lived with the trends of modernity and with the restless and curious spirit of his father.

During the war, he worked as head of the archive and assistant in the printing house at the Commissariat of the Generalitat de Catalunya. Català-Roca's relationship with the world of advertising, graphics and photomechanics provided him with a modern vision of photography. At the same time, his work at the Commissariat de Propaganda allows him to meet characters such as the anarchist Durruti, Errol Flynn or André Malraux.

In Valls from April to June there will be Francesc Català-Roca and the photographers of his time, from June to July it will be the turn of Francesc Catalan-Roca. A book by Valls, with images taken in his town.

In the Fortuny Room of the Reus Reading Center, from July to September, you can see the traveling exhibition The Dalí by Francesc Català-Roca, produced by the Valls Museum; while in Barcelona the College of Architects of Catalonia will organize the exhibition in the autumn Francesc Catalan-Roca. Architectures without pedigree.

In Barcelona since mid-January It can be seen The Català, photographers of a century, exhibition of Museum of the History of Catalonia that traces his life, that of the founder of the dynasty, his father Pere Catala i Pic, and the races of his brothers Pere Català i Roca y Maria Aurea Català.

Càmping La Pineda de Salou®, is since 1970 a tourist establishment owned by Gamite, S.A., registered in the Register of Tourist Companies and Activities of the Generalitat de Catalunya, with number KT-000085-84 and classified as a 3-star public camping site.